The tradition of gingerbreads baking in the present Westpomeranian region dates back to the nineteenth century. Cookbooks from that period provide numerous recipes for gingerbread and gingerbreads. The main components for the preparation of these delicacies were: flour, sweet and bitter almonds, honey, sugar and spices: cinnamon, cloves, cardamom, lemon peel. In the Pomeranian villages gingerbreads were also traditionally baked. Up from the Miedwie lake to the eastern boundary of Pomerania various types of gingerbreads were known: those called “out of the pan” (Pfannback), „of ash” (Aschback) and „stone” (Steinback).

In the archival copies of „Stettin. Nachrichtenblatt des Stettiner Verkehrvereins” weekly (nr 24, 16.12.1938) on the occasion of Christmas a poem dedicated to gingerbreads was featured: 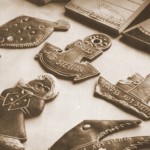 Since 1938 historical sources provide information about the existence of Szczecin’s Gingerbreads, ger. „Stettiner Peperkoken”. The authorities started the tradition of setting on streets of the city Christmas trees adorned with colorful gingerbreads figurines: sailors, anchors, fishing boats, seagulls, fish. This new Advent decoration was designed by the chief architect dr Reichow. Gingerbreads treats could be bought in every bakery and confectionery. Szczecin’s gingerbreads live in the memories of people living in Westpomeranian province before the war. During numerous conversations it can be discovered that many families derived from Szczecin and now living in different parts of Germany, celebrates the tradition of baking gingerbreads according to the pre-war recipes.

Also in Szczecin this beautiful tradition is nurtured and developed. In our small studio in Pogodno – the old district of Szczecin, in our bakery “Filipinka” conducted since 1963 by the Tabiński family, we prepare manually Szczecin’s gingerbreads according to a traditional nineteenth-century recipe. Thanks to our efforts this cakes have been inscripted on the list of traditional regional products in Westpomeranian Privince, which is held by the Ministry of Agriculture and Rural Development, on 28th July 2011. Beautiful, precious products with a deep, spicy flavor and aroma have exceptional quality due to a well-balanced composition of ingredients and thanks to the experienced owners, guardians of the recipe and production process. They are baked with natural bee honey with almonds, cardamom, ginger and cloves. On basis of the information contained in the pre-war materials and photos from the early twentieth century we have reconstructed Szczecin’s maritime forms (fish, sailor, ship, anchor, sailing).

We also prepared models of Szczecin’s architecture. Based on the pre-war photos taken in natural scenery decorative icing was made – in natural, noble colors such as white, chocolate and tan. Embellishments are made with traditional methods, by hand, by specialists of pastry decoration. When dry, gingerbreads are put on shiny gold pads, packed in cellophane and decorated with an elegant bow. At the back of each gingerbread there is a label that presents a brief history of baking. Tradition, top quality, valuable composition, manual work and attention to every baking. The heritage of Szczecin’s Gingerbreads and its beauty – this is what we want to convey to you in our products.

Szczecin’s Gingerbreads have been inscripted on the list of traditional regional products in Westpomeranian Privince, which is held by the Ministry of Agriculture and Rural Development.